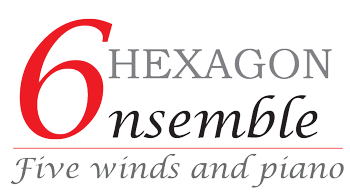 Click here for the programs 2019-2020
About our repertoire
No musical archive is safe for the six members of the Hexagon Ensemble. The ensemble searches all over the world for little known or forgotten repertoire. During this quest it has amassed a unique catalogue that includes over 4000 works: little known works from famous composers, but also pieces by unknown ones. Programs with remarkable repertoire, clear themes and appealing titles typify the Hexagon Ensemble.

The quintets of Mozart and Bethoven as well as the Sextuor by Poulenc are the top 3 of the Hexagon Ensemble’s core repertoire. Lesser known works which the Hexagon Ensemble has successfully shed light on include Joseph Jongens’ Rhapsody, Paul Juon’s Divertimento and the Quartet on Turkmen Themes by Sergei Vasilenko. 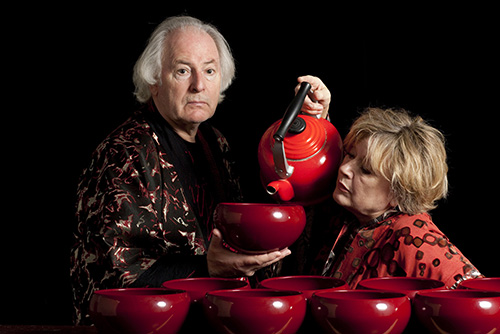 Typically Hexagon
Hexagon’s ambition is evident in its regular performances, but is expressed even more clearly in the special, multidisciplinary productions that the ensemble performed over the past years. These include Lady Macbeth from the Mtsensk District, The Imagination, La Cenerentola, Boris Godunov and the Holland Festival production The Red Kimono.

Press and audiences in the Netherlands and Russia have been extremely enthusiastic about the ensemble’s adaption of Mussorgsky’s Paintings at an Exhibition titled The Imagination. As part of this project, amateur painters made works inspired by the themes of this well-renowned piece of music. During the performance, the paintings made by the amateur artists are being projected above the audience, which creates a uniquely powerful synergy between music and visual arts as well as the musicians and the artists. The artists’ works are also exhibited outside the concerts halls.

The Hexagon Ensemble adapted Rossini’s opera La Cenerentola such that it has become a modern, emancipated family program centered around an autonomous and tough Cinderella. Not only the narrator and the actors, but also the audience and the musicians are given a role in the performance and prove to wield their influence…

Both this project as well as the The Imagination are ‘typically Hexagon’ and appeal to the eyes, ears and the spirits of young and old. This places them at the heart of our artistic ambition and our strategy to appeal to a broad and diverse audience. In 2016, the family program Diary of a Cello premiered to continue this trend.